When supplies of the Polio vaccine are available, are you planning to take the vaccine? 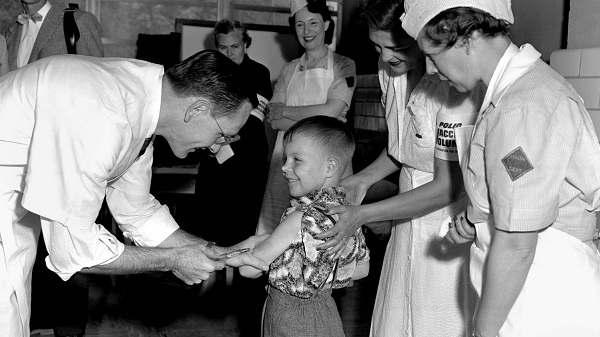 This question was asked the American Public in 1955 when Polio was at its peak.  Much like today, fear gripped the nation as Polio was rampantly spreading through the country.  It seemed to be indiscriminate and health care workers were overwhelmed with new cases.  The polling took place as Dr. Jonas Salk’s injectable polio vaccine was just becoming publicly available.  A fix was in the works.  So let’s take a look at how America reacted to the Polio epidemic and the newly available vaccine.

Interestingly, history often repeats itself. There was vaccine hesitancy nearly 70 years ago in a time with no internet or social media. Humans are, after all, the same creatures even though we find it so hard to identify with the era of our great-grandfathers and grandmothers.

One large difference between then and now does rear its head though. One of the US-based drug manufacturing plants made a huge error in the production of one of the batches of the new vaccine. It went out the door actually containing the live and active poliovirus. This utterly shocking mistake, instead of delivering safety and hope to 40,000 children, gave them the poliovirus. 10 died as a result of this heart-wrenching blunder.

After this occurrence production and the administering of the vaccine were understandably paused while an investigation happened. After the root cause was found the process slowly spooled back into action with increased safety and audit procedures.

The damage to the vaccines’ reputation was great but, over time, the tune of the public changed. The polio vaccine is a vaccine success story as it displays that even up against high percentages of public opinion and in the face of terrible, fatal mistakes, given time to build trust it can win the day. The 2 main factors attributed to the polio vaccine’s success were community trust created by local leaders and celebrity involvement. Again, startlingly similar to the energies we are trying to harness against today’s pandemic. Polio was wiped out in the US in 1979, the only cases that have been recorded inside the country have been brought in by travelers.

History Home/Next Historical Survey: What was the favorite book of the Great Depression?